Why Do People Drop Dead? Causes of Sudden Death

Picture this: you’re enjoying a day of hiking with your family. The sun is shining, the view is beautiful, and things couldn’t be better.

Then one of your family members collapses and doesn’t get up.

It sounds like a nightmare scenario—but it happens on a regular basis. Some of the causes of sudden, unexpected death are rare, but others are quite common. Stroke kills approximately 140,000 people per year in the United States, for example, while heart disease kills more than 600,000.

Here’s an overview of some of the causes of sudden, unexpected death.

Approximately 326,200 people experience cardiac arrest outside of a hospital every year, according to the AHA’s 2015 statistics. The survival rate is not good—only about 10.6% live through the event, and only 8.3% keep good neurological function.

However, when a bystander witnesses the event, the survival rate goes up to one in three. That’s because with cardiac arrest, fast treatment is absolutely vital to recovery and a good outcome.

The heart maintains its beat through electrical impulses that cause the muscles to contract in a regular rhythm. When that rhythm gets disrupted, it can be life-threatening. Heart arrhythmias occur when the heart beats irregularly, too fast, or too slow to maintain proper blood flow.

Heart arrhythmias don’t always cause instant death. Some people have a chronic arrhythmia that occurs for years, with few or no symptoms. When doctors do catch it, the condition can be manageable and is often not life-threatening.

However, when the heart’s rhythm is too severely compromised to pump blood, cardiac arrest can occur—which can lead very quickly to death, if the patient doesn’t get proper treatment immediately.

What are the symptoms?
On a day-to-day basis, a heart arrhythmia may have no symptoms. In the more serious cases—those that constitute a medical emergency—the symptoms may include:

What are the risk factors?
Some people are born with more susceptibility to heart arrhythmias than others. However, it is also often a side effect of other health problems and behaviors. The risk factors include:

How to respond in an emergency
When a person experiences severe arrhythmia, it results in ventricular fibrillation—the lower chambers of the heart lose their rhythm and their ability to pump blood. When this happens, cardiac arrest follows—and the patient can collapse with little or no warning. In these cases, it’s essential that the person receive emergency care immediately. Bystander CPR is often instrumental to the patient’s survival.

If an automated external defibrillator (AED) is available, this can also save the patient’s life. These devices deliver a shock that can reset the rhythm of the heart, and they can be used both by trained and untrained operators. 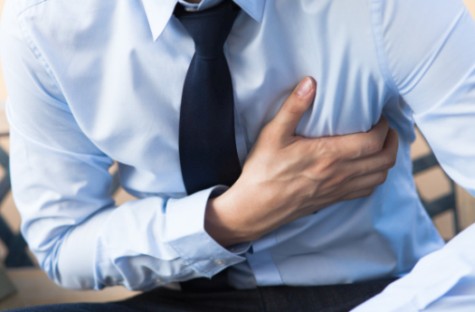 In addition to a regular rhythm, the heart requires a constant supply of oxygen and other nutrients to keep going. These are delivered to the heart through three coronary arteries. If one of these arteries becomes blocked, part of the heart loses oxygen—and starts to die. This is what causes a heart attack.

Men and women tend to experience different symptoms, although people of both sexes may experience any of the symptoms below. Many people imagine heart attacks as occurring suddenly—but they can also be drawn out over several hours.

Common symptoms for men include:

What are the risk factors?
The major risk factors of heart attack include both pre-existing conditions and lifestyle choices. They include:

What to do in an emergency
If the patient has collapsed and is not responsive, it’s essential to call 911 immediately and begin CPR. Unless you are a trained medical professional, it’s best to skip the rescue breaths and just perform chest compressions—hard and fast, with the heel of your hand, to the beat of “Stayin’ Alive” by the Bee Gees.

Some heart attacks occur over a period of hours rather than minutes. If the person has a known heart condition, they should take any medication they’ve been prescribed for chest pain—usually nitroglycerin. Help the person sit down and stay calm, and if the symptoms don’t improve within 3 minutes or so, call 911 immediately. 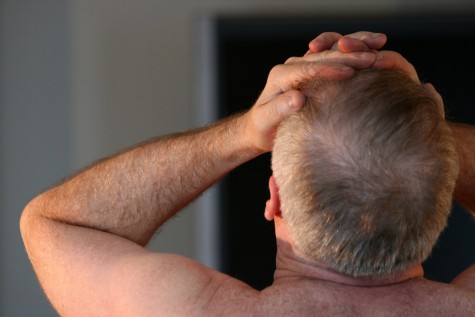 Stroke isn’t as deadly as heart disease in the United States—only about 140,000 people die of stroke every year—but more than 795,000 people per year suffer a stroke. Approximately 75% of victims are over the age of 65.

Like the heart, the brain needs a steady supply of oxygen to function. A stroke occurs when blood flow to part of the brain is blocked, cutting off oxygen. It only takes a few minutes of oxygen starvation for brain cells to start dying, which can cause irreversible damage and even death.

What are the symptoms?
Symptoms of stroke can vary. While a severe stroke might cause permanent paralysis or other major health problems—even sudden death—a milder episode might only cause temporary weakness in an area such as the arm or leg.

At the onset of stroke, symptoms usually occur on one side of the body. They usually hit suddenly, and specific symptoms may vary depending on the part of the brain being affected. General symptoms include:

What are the risk factors?
Anyone can have a stroke, at any time. However, certain behaviors put some people more at risk; as do some diseases, genetic factors, and other things beyond your control. Risk factors include:

What to do in an emergency
While some people make full recoveries, approximately 66% of victims have permanent health problems after their strokes. The faster the person gets treatment, the more likely they are to make a full recovery. That’s why it’s crucial to recognize the symptoms of stroke quickly:

If a patient has any of these symptoms, call 911—even if the symptoms go away.

The data on how many people experience pulmonary embolism isn’t clear—some estimates say as many as 900,000 people experience pulmonary embolism, and about 60,000-100,000 people die from it, every year in the United States. Of these, about 10-30% die within a month of receiving their diagnosis. Most frighteningly of all, sudden death is the first symptom about 25% of patients experience.

Pulmonary embolism occurs when something—usually a blood clot—blocks an artery in the lung. Usually, the blood clots form deep in the veins and arteries, usually in the leg, and travel to the lungs.

Pulmonary embolisms aren’t always deadly—sometimes the clots are small enough to cause damage but not death. Larger blood clots can be fatal, however, and fast treatment is essential.

There are both generalized and very specific symptoms associated with pulmonary embolisms. These include:

What are the risk factors?
Deep blood clots often form when people have been inactive for long periods of time. As a result, a pulmonary embolism is more likely in people who are bedridden because of a serious illness or injury, or who are recovering from surgery. The risk goes up for people who sit for long periods during long-haul flights or car trips. Other factors include:

Things to watch out for include: 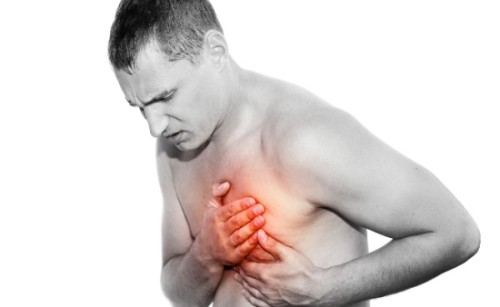 The aorta is the largest artery in the body. It is also the toughest, designed to handle a large volume of blood. When the walls of the aorta weaken, they can bulge outward, creating an aortic aneurism.

Not all aortic aneurisms burst. Sometimes, however, an aneurysm that has existed for years will suddenly rip, and when this occurs, it is a major medical emergency. Aortic aneurisms drain large volumes of blood away from other organs, and the problems that can occur include heart attacks, stroke, severe kidney damage, and ultimately death.

There are sometimes no symptoms for an aortic aneurysm until it becomes very large—or until it breaks. However, larger aneurysms might cause symptoms as they grow, including:

When an aortic aneurysm occurs, loss of consciousness is quick to follow. The patient may experience a sense of tearing pain in the side, abdomen, back, or groin. Other symptoms may include:

What are the risk factors?
An aortic rupture occurs when an aneurysm, or bulge caused by a weak spot in the wall of the aorta, ruptures. Some risk factors for an aortic aneurism include:

What to do in an emergency
If you suspect an aortic rupture, time is of the essence. Call 911 immediately. Keep the patient calm and comfortable. If the patient loses consciousness, you may have to begin CPR.

US National Library of Medicine https://medlineplus.gov/ency/article/000063.htm