AED's 101: What They Are, What They're For, and Why You Should Learn to Use One

@cprcert This site is very easy to navigate and the information is easy to follow https://t.co/kGgiJoAXIn
Posted 3 Days Ago

@cprcert This was a great CPR class. https://t.co/CFFRvTe35L
Posted 5 Days Ago

@cprcert It was concise and thorough. https://t.co/rfhuGkZdgu
Posted 8 Days Ago

You’ve probably seen them on television. Automated external defibrillators (or AEDs) are a fairly dramatic tool—with the two paddles that send an electric shock through a patient’s body. They seem difficult to use and even a little dangerous, but the truth is that these are very basic lifesaving devices that anyone can learn to use, with a little training. They’re also often kept in public places such as schools and airports in case of emergency need. Here are just a few things you should know about automated external defibrillators. 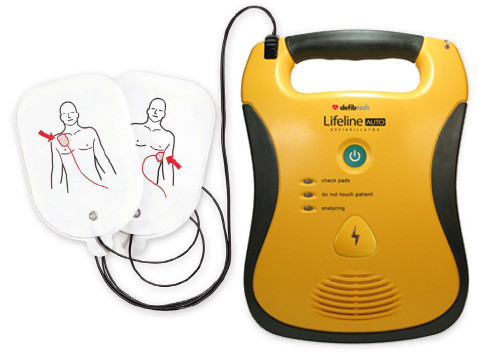 What is an AED?

Automated external defibrillators are battery-operated, portable devices that are lightweight and easy to carry. They have sticky pads with electrodes that are meant to be attached to the chest of a patient.

The electrodes detect the patient’s heartbeat and send information to a computer system inside the AED. The computer automatically assesses the data to decide whether the person is experiencing cardiac arrest and needs an electric shock. If a shock is needed, the AED is designed to use voice prompts to walk the user through delivering it.

While AEDs are often used by medical personnel, they are designed to be usable even by people with little or no medical training. 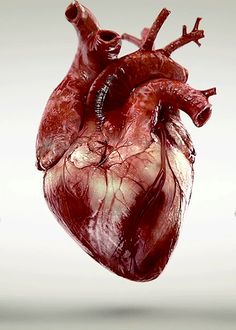 What is an automated external defibrillator used for?

Automated external defibrillators are used to check the rhythm of the heart and detect any arrhythmias and deliver an electrical shock to restore the heart’s normal function.

The heart itself has a natural electrical system that keeps it beating, and keeps the rhythm and rate consistently even. As the heart beats, an electrical signal travels from top to bottom, causing the muscle cells to contract along the way. As they contract, they pump blood through the heart’s chambers.

If the heart’s electrical system breaks down, one of the symptoms is an arrhythmia—or a problem with the even rhythm it is supposed to maintain. This could appear as a heartbeat that runs too fast or too slow, or with an uneven rhythm. If the heart stops altogether, which can also happen due to arrhythmia, a sudden cardiac arrest can occur.

If that happens, an AED can be used to reset the heart’s electrical rhythm—and get blood pumping again. 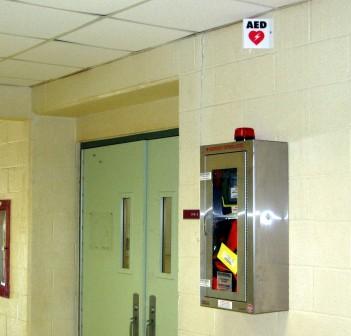 Where can I find an automated external defibrillator?

Doctors and medical staff use them in hospitals and healthcare facilities, and emergency response teams usually have one on hand. You can also find them in public places such as hotels, airports, casinos, shopping malls, sports stadiums, and schools—anywhere large crowds might congregate. Individuals can also buy AEDs to use in the home. 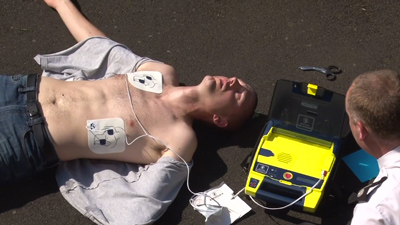 What are the physical risks of using an AED?

The electric shocks may look dramatic and painful—but believe it or not, AEDs are extremely safe. There have never been any reported instances of an AED delivering a shock inappropriately to someone who didn’t need it, or ever causing harm to bystanders, users, or patients. AEDs can be used on adults as well as children and even infants.

Can I be sued for delivering electrical shocks using an AED?

Some people have concerns that using an AED without being asked in an emergency situation could make them vulnerable to legal consequences—if the AED causes injury to the victim, for instance, or if the victim has a Do Not Resuscitate order.

However, AEDs are extremely safe and there has never been a documented case of a person being injured by one. In addition, laws such as the Good Samaritan laws and the Federal Cardiac Arrest Survival Act are designed to protect bystanders delivering emergency aid in good conscience, even to someone who has a Do Not Resuscitate order.

I own a building. Should I buy an AED?

It’s an excellent idea to have an AED on the premises in case of emergencies. While emergency response crews generally do carry them, every second counts in cases of cardiac arrest—and it’s possible that the rescue crew won’t get there in time if someone has a cardiac arrest on your premises.

If you are considering buying an AED, it’s a good idea to offer first-time and ongoing training to the people who work there to make sure they’re comfortable using and maintaining the device. You should also let your local emergency officials know that you have one on your premises. 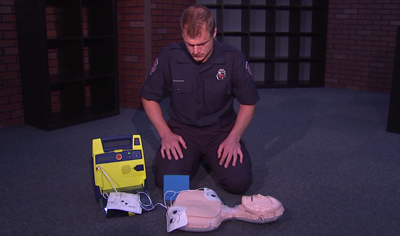 How do I get trained in using an AED? Most schools that offer training in CPR and First Aid also offer AED training, either by itself or as part of one of their other courses. It’s possible that AED training will also be required under new CPR guidelines, which will be released in 2015. You can also get certified in using an AED. Most classes come under two possible categories: those for medical professionals and emergency responders, and those for non-medical personnel who may need to use an AED at their place of work or at a public facility.

How effective are AEDs?

Extremely effective—especially compared with CPR without it. Depending on which statistics you read and whether the person receiving treatment is in a hospital or not, CPR is only 2%-18% effective. AEDs, by contrast, increase survival rates for victims of sudden cardiac arrest by more than 80% if the person receives treatment within the first three minutes.

It’s not hard to use an AED—even for people with no prior medical training. If you own or work at a facility with an AED present, or anywhere someone might experience cardiac arrest, it is absolutely worth it to have an AED on the premises as well as people who know how to use one. AEDs are most effective within the first three minutes of a cardiac arrest—and it can take longer than that for bystanders to realize something is wrong and to call an ambulance. In addition, AEDs improve recovery statistics for cardiac arrest victims from as low as 2% to upwards of 80%. There’s no question that AEDs save lives—and knowing how to use one is a useful skill.