The American Heart Association updates its CPR guidelines every five years. In the past, the organization conducted periodic, thorough reviews of these guidelines, but in 2015 it introduced a new system of continuous evaluation of evidence in an online format.

This change was designed to allow for scientific advances to be incorporated more efficiently, and implemented in hospitals and communities more effectively.

This past year in 2020, the AHA rolled out its first set of guidelines under the new process. These include 491 individual recommendations across both layperson and healthcare provider CPR. Here’s a look at some of the more prominent changes and recommendations.

While many of the AHA’s new guidelines address CPR treatment practices for medical professionals, it also spends a significant amount of time updating guidelines for lay bystander education and training.

According to the most recent numbers, about 350,000 adult patients experienced cardiac arrest outside of a hospital in 2015. Fewer than 40% received bystander CPR, and less than 12% received AED application from a bystander before the arrival of EMS teams.

The rate of survival for out-of-hospital cardiac arrests has hit a serious plateau since 2012. One issue the AHA seeks to address in its new guidelines is promoting layperson training and confidence in administering lifesaving CPR.

Laypeople should immediately start CPR-rather than checking for a pulse. 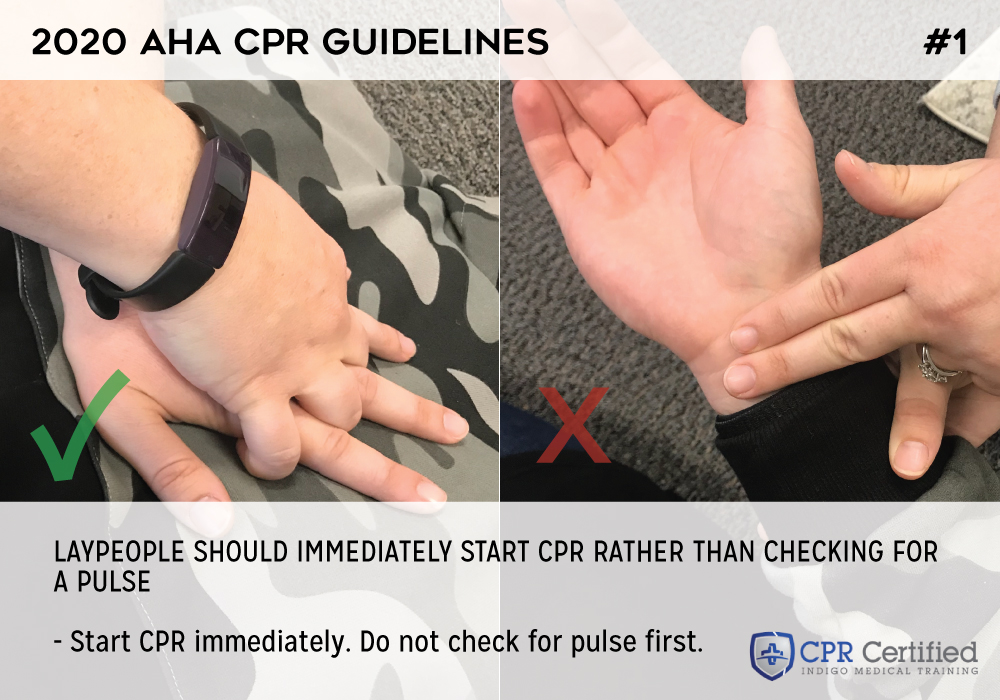 In 2010, AHA guidelines stated that layperson rescuers should not bother checking for a pulse if a patient suddenly collapses. Instead, they should assume cardiac arrest and initiate CPR immediately.

The 2020 guidelines reaffirm that advice, recommending that layperson rescuers immediately start CPR in these situations rather than wasting valuable time looking for a pulse.

That’s because laypeople often have a difficult time locating a pulse, especially in emergency situations. In addition, new research demonstrates that the risk of harm is low if it turns out the patient is not experiencing cardiac arrest. 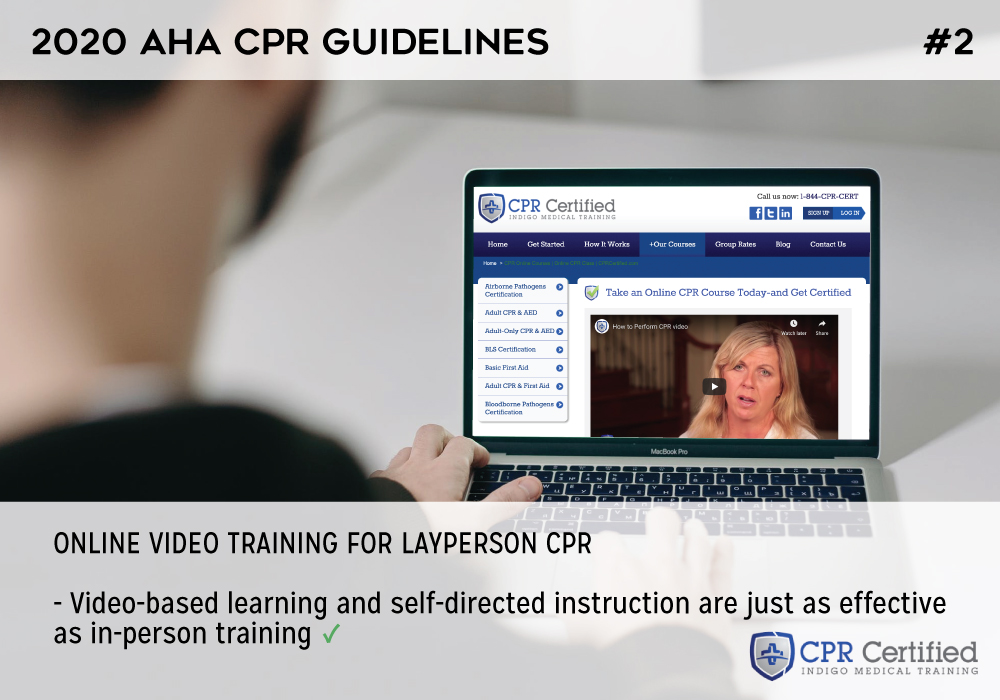 In 2015, AHA guidelines stated that a combination of remote self-instruction and hands-on, instructor-led training should be accepted as alternatives to traditional in-person classes for layperson CPR.

The 2020 updates reaffirmed that position based on research that finds video-based online CPR learning and self-directed instruction are just as effective as in-person training for layperson CPR.

This type of training is also more accessible, and the hope is that these guidelines will result in a larger number of laypeople choosing to pursue CPR certification.

The new 2020 guidelines also recommend that CPR training should start in middle and high school to instill a sense of confidence and familiarity at a young age, and that lay rescuers learn to administer Naxolone to individuals experiencing a drug overdose. 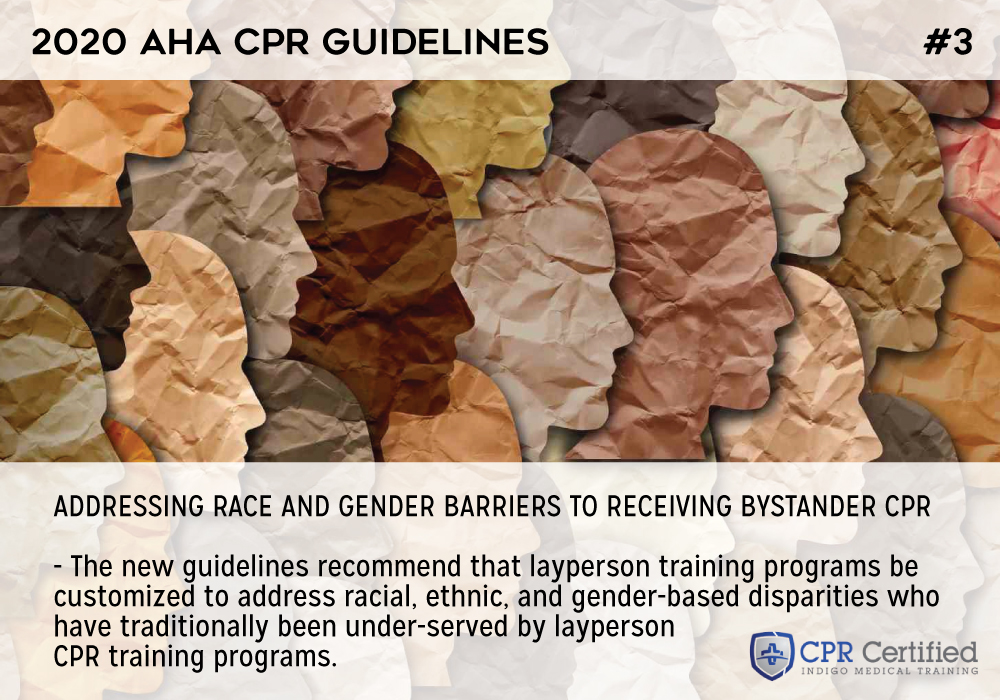 One major issue with bystander CPR is that women, minorities, and people in lower socio-economic communities are less likely to receive bystander CPR.

The new guidelines recommend that layperson training programs address racial, ethnic, and gender-based disparities in who receives lifesaving bystander CPR, and be customized as needed for communities of color and others who have traditionally been under-served by layperson CPR training programs.

Another innovation in this year’s guidelines involves the use of mobile phone technologies to alert CPR- and AED-trained bystanders when someone nearby goes into cardiac arrest.

This mobile phone alert system could be used by dispatchers to alert trained volunteer bystanders within the community when someone experiences cardiac arrest, raising the chances that these patients will receive lifesaving CPR while waiting for EMTs to arrive.

This recommendation is based on a systematic ILCOR review that determined that such a mobile alert system could boost bystander response times, increase the number of cardiac arrest patients who receive bystander CPR, and improve survival rates for cardiac arrest outside of hospitals.

In contrast to survivability rates for out-of-hospital cardiac arrest, survival for cardiac arrests that happen in a hospital setting continue to get better. The 2020 AHA guidelines preserve some previous recommendations, while adjusting others based on the current research.

Here’s an overview of the more salient points. 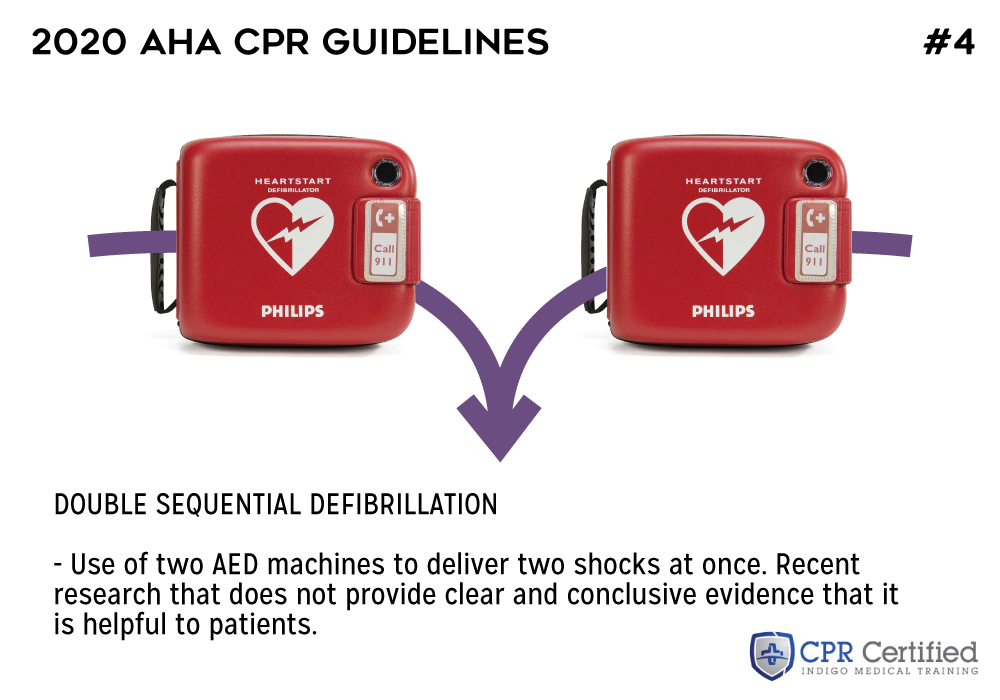 Double sequential defibrillation occurs during use of an AED, when the rescuer uses two AED machines to deliver two shocks at once. In the past, it was common for rescuers to be trained to administer AED treatment this way, but the AHA did not mention whether it was in fact effective.

This year, however, the AHA cites recent research that does not provide clear and conclusive evidence that it is helpful to patients, and as such it is not supported in the current guidelines. 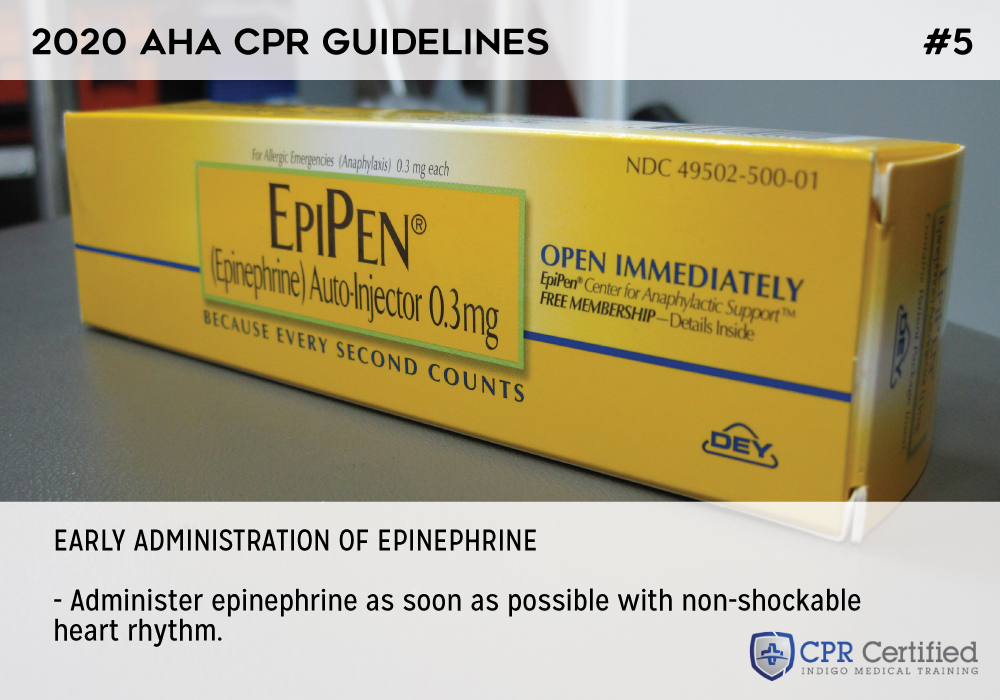 In 2015, AHA guidelines suggested that emergency rescuers administer epinephrine as soon as possible to a patient with a non-shockable heart rhythm—that is, a heart rhythm that is not responsive to defibrillation.

In 2020, the AHA guidelines make a stronger and more specific recommendation for the use of epinephrine as soon as attempts at defibrillation fail, based on updates from last year showing that epinephrine should be administered every 3-5 minutes for as long as the resuscitation continues. 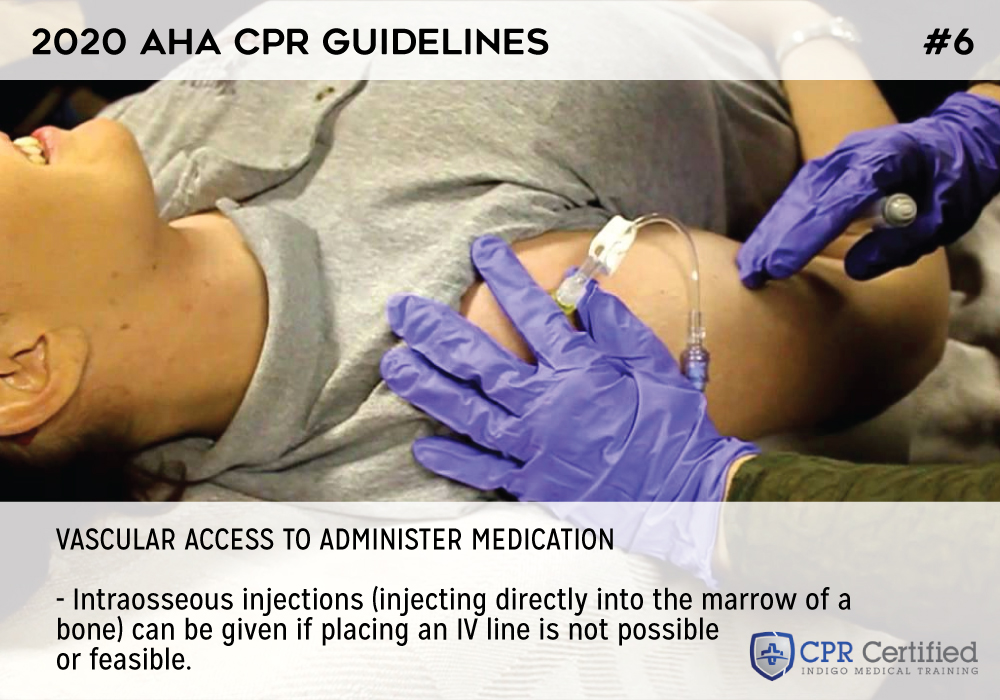 The 2010 recommendations stated that using an IV should be the preferred technique; more recently, however, some EMS training programs have been emphasizing intraosseous access—that is, injecting medication directly into the bone marrow.

The 2020 AHA guidelines reaffirm that IV delivery should be the first resort, based on a systematic review that found preferable outcomes for IV rather than intraosseous access. The guidelines state that intraosseous injections can be given if placing an IV line is not possible or feasible.

Approximately 20,000 children and infants experience cardiac arrest in the United States every year, for reasons that vary from those that cause adult cardiac arrest.

The 2020 AHA guidelines make some changes to recommendations for treatment of cardiac arrests in children and infants—while reaffirming and strengthening other prior recommendations. Here’s an overview. 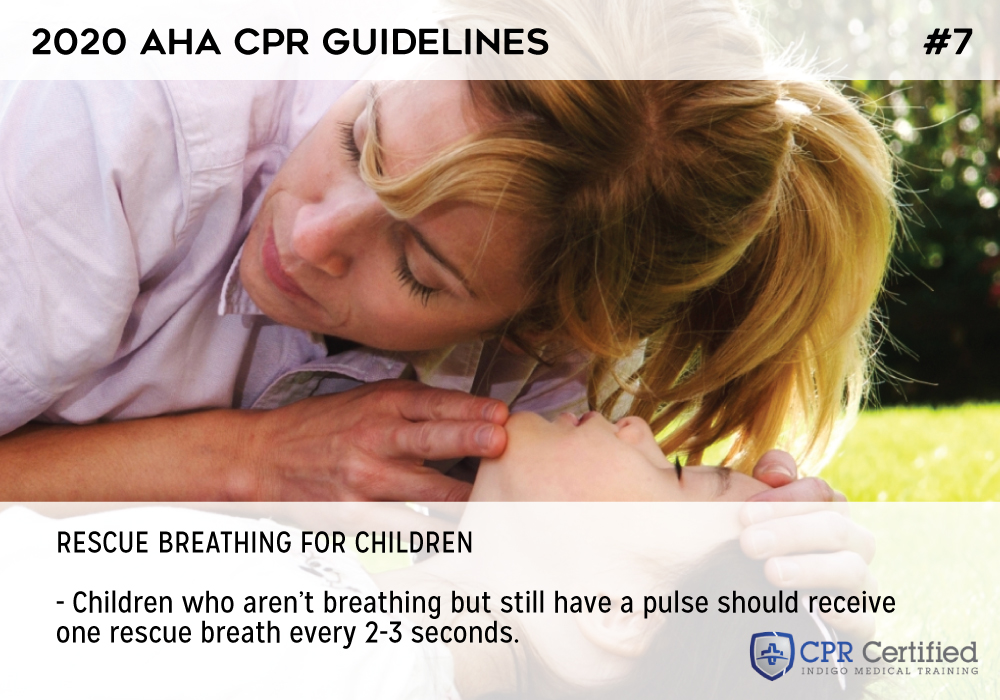 The older guidelines, established in 2010, stated that if the patient has a pulse but isn’t breathing, rescue breaths should be given at a rate of about one breath every 3-5 seconds until the patient resumes breathing. The recommendation for children who were intubated was one breath every six seconds.

In previous years, the AHA did not recommend rescue breaths more frequently than this because of the risk of overventilation, which can raise pressure within the chest cavity.

However, a recent study across several hospital campuses found that healthcare providers often deliver rescue breaths more frequently than AHA guidelines stipulated, and that this is tied to better outcomes.

This is why the AHA now recommends that children who aren’t breathing but still have a pulse should receive one rescue breath every 2-3 seconds. 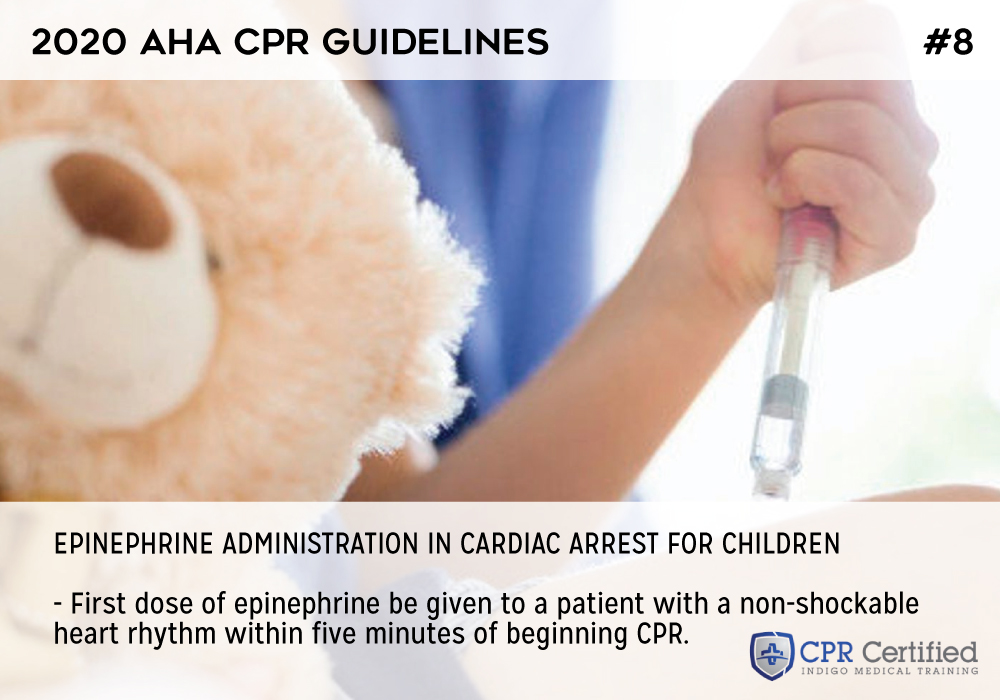 Under previous 2015 guidelines, the AHA recommended that epinephrine be administered during pediatric cardiac arrest. But the guidelines were non-specific.

In 2018, the Pediatric Cardiac Arrest Algorithm was updated to recommend patients with non-shockable rhythms receive epinephrine every 3 to 5 minutes. It did not specify when the administration of epinephrine should start, however.

The 2020 AHA guidelines recommend that the first dose of epinephrine be given to a patient with a non-shockable heart rhythm within five minutes of beginning CPR.

This recommendation is based on a study of children experiencing cardiac arrest with non-shockable rhythms in a hospital setting. The study demonstrated significant decreases in outcomes for every minute that epinephrine was delayed—with better survival rates for patients who received epinephrine within the first five minutes of CPR.

There are a number of other recommendations in the guidelines related to basic and advanced life support beyond the topic of CPR, including enhanced guidelines for rehabilitation and monitoring of cardiac arrest survivors.

Check out the Highlights of the 2020 AHA Guidelines for CPR and ECC [PDF] for more details.