The History of Defibrillators

An automated external defibrillator, or AED, is something of a miracle medical device.

It’s designed to reverse cardiac arrests—one of the most deadly conditions that exist. A cardiac arrest happens suddenly, usually with no prior signs or symptoms, and it can occur in people of all ages and health conditions. Many victims do not have a prior history of heart problems.

Approximately 1,000 people a day, or one person every two minutes, dies of cardiac arrest in the United States. But an AED saves lives—studies show that cardiac arrest victims who receive a shock from an AED are twice as likely to survive as those who don’t.

An AED works by analyzing the electrical impulses in a cardiac arrest victim’s heart, judging automatically whether an electric shock should be administered, and administering a shock of the appropriate strength to restart a healthy rhythm in the victim’s heart.

And AEDs are incredibly easy to use. They’re designed for use by both medical professionals and laypeople with no medical training. In fact, AED certification has become an essential educational component to any CPR course in-person or online. And they have a long and somewhat surprising history. 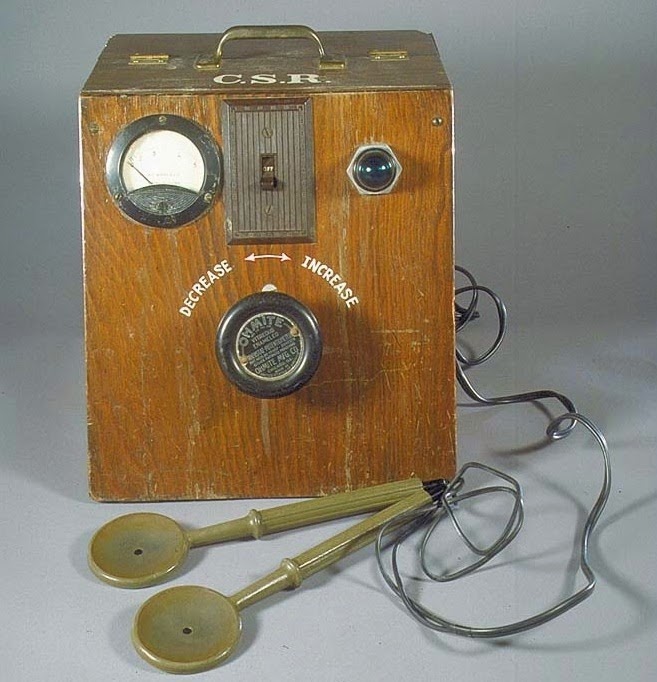 In 1899, two physiologists from the University of Geneva in Switzerland, Jean-Louis Prevost and Frederic Batelli, performed the first demonstration of an early model of the defibrillator.

Their demonstration showed that slight electrical shocks could induce an erratic heartbeat in dogs, and that a stronger shock could restore the heart’s natural rhythm.

Sometime after 1899, a protocol was developed to inject drugs straight into the heart to restore its function. In 1933, electrical engineer C. Henry Hyman, teamed up with heart specialist Dr. Albert Hyman to develop an alternative approach.

Their method involved inserting a hollow needle into the chest, through which was passed an insulated wire. The wire delivered an electrical shock directly to the heart. They called their invention the “Hyman Otor.”

It isn’t clear whether the Hyman Otor was ever tested on a real cardiac arrest victim.

1930: The external defibrillator as we know it

The earliest form of the device we would recognize today as an external defibrillator was developed by another electrical engineer, William Kouwenhoven.

He studied electrical impulses in the human heart during his time at Johns Hopkins University School of Engineering, and later invented an external device that provided a “jump start” to hearts that had lost their rhythm.

1947: The first tests on human patients

Kouwenhoven first tested his device on dogs. It wasn’t tested on a human subject until 17 years after its initial invention.

The person overseeing the test was Claude Beck, a professor of surgery at Case Western Reserve University. He had a theory that irregular heartbeats could occur even in healthy hearts.

He conducted his first test on a 14-year-old boy who was undergoing surgery for a congenital heart defect. During that time, the standard protocol was to open the chest and resuscitate the heart using something called “manual cardiac massage.”

During this test, the boy’s heart was massaged for 45 minutes before Beck used the defibrillator, attaching the paddles directly onto the heart. The patient was also given antiarrhythmic medications. The test was successful, and the boy’s normal heart rhythm was restored.

Up until the 1950s, the only way you could restart a heart using defibrillation was to cut open the chest and deliver the shock directly to the heart. That changed in the 1950s.

During that decade, Dr. V. Eskin from the USSR (in what is today Kyrgyzstan) developed and tested a closed-chest defibrillator device that delivered more than 1,000 volts to the surface of the chest (prior to that, voltages delivered by the defibrillator ranged from 300 to 1,000 volts). The shocks typically lasted from 100 to 150 milliseconds.

1958: “Reanimation Research” and the reversal of death

From the 1930s to the 1950s, some of the more important strides in defibrillator development occurred in the USSR. In 1958, US senator Hubert H. Humphrey visited the Moscow Institute of Reanimatology, where he met with some of the leaders in what was called, at the time, “reanimation research.”

Senator Humphrey worked tirelessly after that visit to establish a federal program devoted to such research within the National Institute of Health, promoting his vision to Congress as competing with the USSR in researching ways to “reverse death.”

The next year, teams of researchers fine-tuned their understanding of the timing of shock delivery. New devices were able to reverse a range of arrhythmias, including atrial fibrillation, atrial flutter, and supraventricular tachycardia.

A standard waveform for restarting the heart was eventually developed—know as the “Lown-Berkovits waveform.” This was the standard until a new waveform was developed in the 1980s.

The first portable version of a defibrillator may have been developed in 1959 in the USSR. In the West, Professor Frank Pantridge of Belfast, Ireland, developed a portable model in the 1960s.

Making the AED portable expanded its reach and made it available to victims of cardiac arrest outside the hospital. Today, AEDs can be found in hospitals, schools, airports, and other public places—and are part of the standard gear in ambulances. Their widespread presence and easy portability have made them much more effective at saving lives.

Research started on implantable defibrillators (sometimes referred to ICDs) in 1969—but the first device wasn’t implanted into a patient until 1980.

These devices are designed to help patients who have regular bouts of arrhythmia and are at heightened risk of cardiac arrest, and usually they are only implanted in people who have already suffered at least one cardiac arrest.

These implants can allow those with severe heart issues to live relatively normal lives. In 1996, the youngest patient to receive an implant was 18 years old; today, doctors can implant these devices into the hearts of newborn babies if necessary.

The AED may seem like a modern innovation—but the surprising fact is that over 120 years of research and development have led to the creation of this astonishing device.